The Should-Be Solution to the Student-Debt Problem 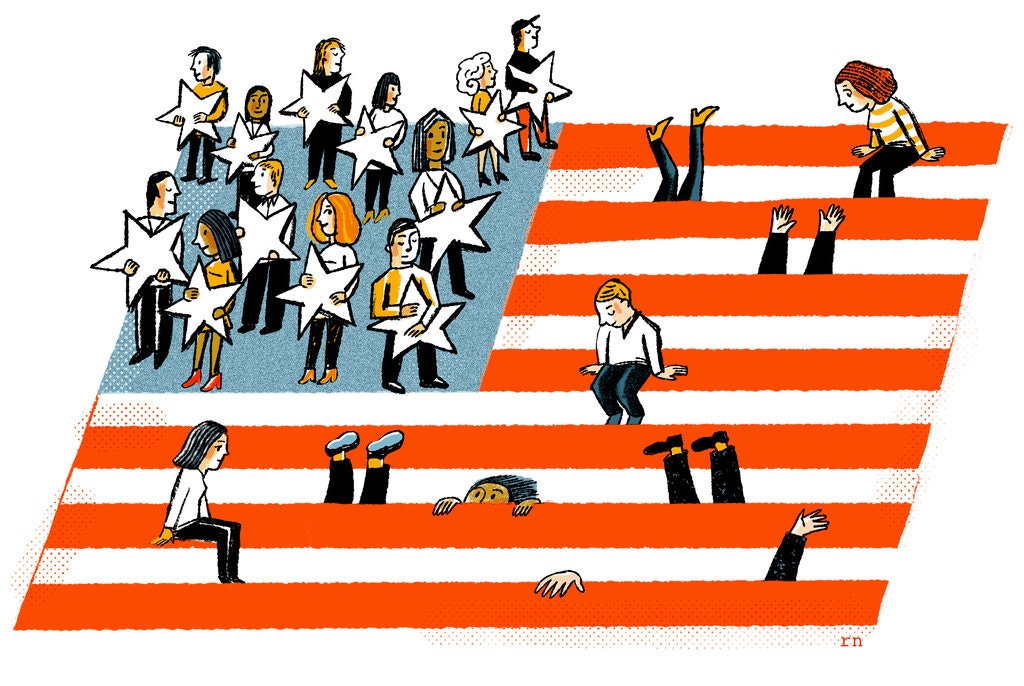 With more than 7.5 million student loan borrowers in default and nearly 2 million others seriously behind on their payments, there’s little question that the handful of federal programs designed to help struggling borrowers pay what they can afford aren’t working for everyone.

The idea is simple: Borrowers make payments based on how much money they earn. But these so-called income-driven repayment plans are mind-numbingly complicated. There are four different versions to sort through, all with slightly different rules. They can be tricky to get into and easy to fall out of, yet they’re becoming increasingly essential.

Enrollment in income-driven plans has grown to eight million, a more than fourfold increase from 2013, making it a crucial coping mechanism for a broad population of borrowers. But many of them carry higher balances, suggesting they pursued advanced degrees — an indication that the most at-risk borrowers, who often carry less debt, are not finding their way in.

“There was a narrative that this was going to, if not solve, significantly reduce, the problem around defaults on student loans,” said Mark Huelsman, associate director of policy and research at Demos, a public policy organization. “But we haven’t seen that happen.”

Haley Garberg, a newly married 33-year-old physical education teacher, has been in various repayment plans for nearly a decade. Her first job after graduating in 2008 paid $22,000 annually — a salary that didn’t come close to covering her living expenses and a $700 monthly loan payment. With her parents’ help, she made those payments for a couple of years. But she eventually called her loan servicer and managed to get into a plan that saved her nearly $200 a month — enough wiggle room to afford internet service.

Still, Ms. Garberg was living close to the edge. She moved back with her parents in 2013 to build up her savings as she also dealt with a rare breathing condition that required three surgeries over the following year. A $3,000 insurance deductible meant she had to take out a personal loan to pay her share of the bills, and when she couldn’t afford her inhalers, at roughly $300 to $400 a month, she would do without them. She switched plans again in 2014 and pursued a master’s degree in hopes of boosting her earning power.

“Income-driven repayment doesn’t care that you have 18 bills to pay,” she said.

First instituted 25 years ago, income-dependent repayment was expanded during the administrations of George W. Bush and Barack Obama. It also grew more complicated. Borrowers must sort through an alphabet soup of income-driven repayment plans: I.C.R., I.B.R. (which comes in two flavors, new and classic), PAYE and REPAYE.

Monthly payments are often calculated as 10 to 15 percent of discretionary income, but one plan costs 20 percent. Discretionary income is defined as the amount earned above 150 percent of the poverty level, which is adjusted for household size. For a single person, the federal poverty level is typically $12,490, so single borrowers generally pay 10 percent of what they earn above $18,735. (After 20 years — sometimes 25 — any remaining debt is forgiven. So far, about 20 borrowers have remained enrolled long enough for that to happen, according to the Education Department.)

But the payment calculation is the same for all borrowers and doesn’t account for local variations in cost of living. And, as Ms. Garberg discovered, it also doesn’t consider borrowers’ other costs.

“The assumption that nobody should be defaulting because we have I.D.R. is making the false conclusion that I.D.R. is affordable,” said Colleen Campbell, director for postsecondary education at the Center for American Progress, a left-leaning research and policy group. Some borrowers with low incomes and low balances often don’t receive any relief because of a quirk in the formula, she said.

Once borrowers are in a program, it can be necessary they stay there: Interest still accrues on many of the loans, meaning those who make zero or low payments for many years can fall deeper in debt. To exit the program could mean jumping up to a higher payment than they had faced before enrolling.

There’s also the psychological toll of watching your debt increase — all while you’re trying to pay it down — that often goes unacknowledged.

“The name of the game is to get out of it as soon as possible,” said Natalia Abrams, executive director of the Student Debt Crisis, an advocacy group. “It’s pretty insidious.”

And experts believe the programs are not reaching the most vulnerable borrowers who could benefit the most.

Those in default don’t look like your stereotypical college student, according to a report by the Center for American Progress. Defaulters tended to be older, nearly half never finished college and their median cumulative student debt held was rather low, at $9,625.

Those enrolled in income-driven plans, however, have much higher balances: an average of $58,000 to $68,000, depending on repayment plan and loan portfolio, according to an estimate from Demos, the public policy organization. That suggests many enrollees may have finished four years of college and worked toward advanced degrees.

Many of the most vulnerable borrowers are probably unaware the income-driven plans programs exist, academics and other experts said, while others may have gotten bad advice.

An audit released by the Education Department in February found that the private companies it hires to service student loans failed to inform borrowers of their repayment options — and may have directed them to less attractive alternatives like forbearance, which allows borrowers to temporarily suspend payments. Another government report delivered similar findings last year, and five attorneys general have sued one of the largest loan servicers for, among other things, failing to guide borrowers into income-driven plans.

Even the repayment calculator provided by the Department of Education has been criticized by student borrower advocates who say it could scare away those who don’t read the fine print. It assumes the borrower’s income will grow 5 percent annually — roughly double the recent historical average — which can make the total cost of repayment look unrealistically high.

Borrower advocates have pushed for changes that would give borrowers more discretionary income and restrain the growth of unpaid interest. They have also suggested automatically enrolling severely delinquent borrowers in income-based plans and streamlining the process to recertify every year, so that borrowers don’t accidentally fall out.

There is broad agreement on making recertification simpler, because those who fall out face higher payments. In 2017, the government proposed easing the process by giving the Education Department permission to access borrowers’ tax information from the Treasury Department, which would save borrowers the hassle of resubmitting their income and other information every year.

There have also been government efforts to make the entire loan repayment process easier, which includes applying to these relief programs. The Education Department has long sought to create a one-stop portal for borrowers, but the loan-servicing industry has resisted.

There have been a variety of proposals to streamline the plans, including in the Trump Administration’s most recent budget, which called for a single income-driven repayment program that could make forgiveness easier to reach for some borrowers while potentially costing others more. So far, no specific proposal for a single program has gained widespread bipartisan traction.

Student debt has been a hot topic on the campaign trail, with Democratic presidential candidates offering various proposals. Senator Bernie Sanders of Vermont, Senator Elizabeth Warren of Massachusetts and Senator Kamala Harris of California, for example, have all proposed varying levels of debt forgiveness. And last week, Joe Biden suggested reworking income-based repayment, including by eliminating payments and the accrual of interest for those making under $25,000.

For now, the hodgepodge of income-driven repayment plans remains a cumbersome but necessary tool for all types of borrowers — and far from a solution to the problem of widespread educational debt.

Ms. Garberg recently learned through a company called Summer — which helps students navigate the repayment maze — that she was eligible for lower payments through a different plan, called Revised Pay As You Earn, or REPAYE. That cut her payments to about $240 a month; so far, she has paid down about half her debt.

But her recent marriage has added another variable to the loan calculus: her husband. She is nervous about how her payments will change once his income is factored in. And, for now, it might delay another plan.

“I feel like I can’t have kids until my loans are paid off,” Ms. Garberg said. “How do you pay for day care?”